Tips on Shooting Captivating Pictures with the “Fisheye”

From underwater to great-scale shooting

Hello to all of you! My name is Andriy. Here is my first post at our blog and I want to tell you about wide-angle lenses – the “fisheye”.

I would like to start with a few words about the history of these object lenses.

Divers were the first to think about such lenses, as they had to take photos of underwater. But because of the view angle decrease in the water, they had to sail away from the project in order to take a decent photo.

Divers had to have a wide-angle lens allowing to take photos from such a long distance that was impossible at that time. They tried to use the group of convex lenses to increase the view angle, but they encountered the problem – such lenses distorted pictures severely.

Background seemed to be further than it actually was and objects on the edge of the image were distorted. But after submerging this distortion disappeared and the image looked normal.

Over time these object-glasses became popular even on the surface and among videographers who filmed skaters. Such object lenses allowed to take a full-length picture of a person together with surrounding objects and architectures in really short distance.

Photographers in turn started using these lenses for shooting in small and dim rooms. Thanks to greater sensitivity and the wide view angle, these object-glasses are ideally to use on different parties. But it doesn’t mean that you can’t take a beautiful nature picture by wide-angle lenses – “fisheye”, they help to shoot panoramas and landscape photos. They can catch till 180 degrees in all directions.

And now I want to tell you about peculiarities of fisheye shooting.

While choosing the perspective make sure that unnecessary objects or your own fingers don’t hit in the frame. I use aspheric fisheye Samyang 8mm f3.5. This object-glass is used with non-full matrix cameras and is more accessible to video-shooting but it doesn’t prevent me from using it effectively in photo-shooting. 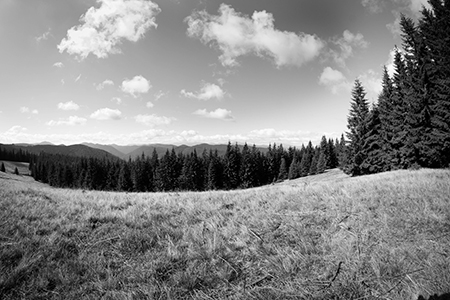 The characteristic feature of fisheye object-glasses is that they are hyper focal. It means that when diaphragm is covered to the meaning of 5.6 and higher and the focus ring is on infinity, all objects will be in focus, regardless of the distance. But remember that in order to achieve the best result you should put focus ring in approximate position to the desired distance.

Here’s a piece of advice for people who want to take pictures in black and white mode. Don’t try to take images that differ from your mood. Take them with your heart, not with the mind and be sure eventually you will succeed.